He has a Point about the Death Star.

Islamic State Militants Advance Despite Airstrikes: ‘Most of the eastern and southern parts of the city have fallen under the ISIS control…the situation is getting worse’

Schlock and Blah revisited… you can’t kill an idea from the air.

pundit from another planet 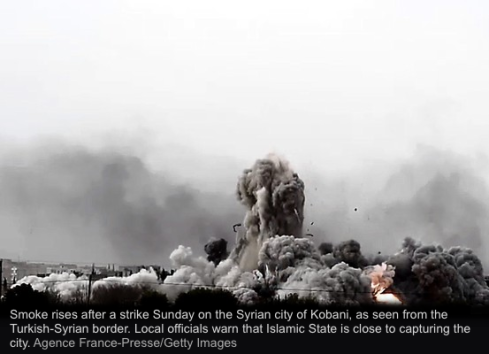 For WSJ, Margaret Coker in Erbil, Iraq, Jay Solomon in Cairo and Tamer El-Ghobashy in Baghdad report: Islamic State militants have gained territory in Iraq and Syria despite weeks of bombing by the U.S. and its allies, raising questions about the coalition’s strategy of trying to blunt the jihadists’ advance while local forces are being trained to meet the threat on the ground.

“The strategy’s biggest weakness in Iraq, officials there say, is the glacial pace of cobbling together an Iraqi political alliance between Sunnis willing to join with the Shiite-controlled central government to rebuild a national military force to fight Islamic State more effectively.”

In Syria, fighters from Islamic State, also known as ISIS, have taken large sections of the city of Kobani in recent days, said Ismet Sheikh Hasan, the defense minister of the city’s…