The New Face of the SA 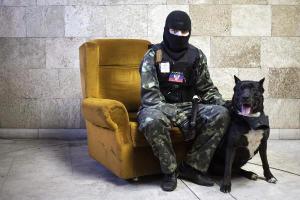 I came across a an article that brings new meaning to Family Photos.

“Pro-Russian” Ukrainian Militants take a moment out of Clubbing Ukrainians and Taking over Government Buildings to claim their place in Photo History.

For those of you not Familiar with Strurmabteilung (SA), they were the Paramilitary group made up of criminals and thugs used to enforce “peace” on behalf of the National Democratic Socialists during Hitler’s rise to power.  They were the “Army” the NAZI’s used prior to controlling Germany.

But Evil never see’s itself that way… which lends to “charming” moments like the one we link to here.  Enjoy.

I would also like to add… this line the Media is feeding us about an “Imminent Invasion” of Ukraine is absurd.  It’s already happened and is nearing completion…  We’ve been watching it.  We see it for ourselves.  Yet many of us want to deny the episode is occurring because we do not want to admit our current Crew Occupying the White House is in way over their heads.  And most importantly to our Allies this Administration, by not honoring our treaties, have Conceded Ukraine to the Russians.

The Government desperately wants the story to go away.  Not Ukraine necessarily, but the story the World is watching The United States not standing by their friends and not keeping their word.

Just like so many other stories, the Liberal/Socialist Press will make sure that happens.  So instead of the disintegration of Freedom and Liberty around the World and Here at Home, we will be fed a constant diet of missing airplanes and bigoted NBA owners which the majority of us couldn’t explain how either affects our lives… but we’re pissed.  Just ask us.

And one last item… Because of my background I too collect Russian Propaganda Posters.  I find them historically interesting in terms of how a Government manipulates that minds of their citizens and creates the environment where Tyranny and Oppression can flourish.

However, I do not display them in my Living Room.  I can’t imagine doing so any more than I would display NAZI Propaganda in my Kitchen…  Or pictures of Pol Pot in my Shed… or Mao in the Garage.  The fact Journalist Claire Shipman and Obama Spokesperson Jay Carney do so is a valid question worth filing in the back of your mind.

Evil never sees itself that way…….